Russell Albion "Russ" Meyer
"King of The Nudies"
"I Was Glad to Do It"
FILM PRODUCER AND DIRECTOR
MARCH 21, 1922

SEPT. 18, 2004
Russ Meyer passed away 7 years ago today at the age of 82 of complications of pneumonia at his home in the Hollywood Hills.  A portion of today's show will be pay homage to the film music generated form his body of work.
LISTEN HERE! 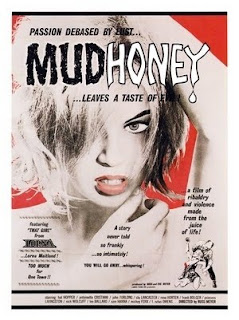 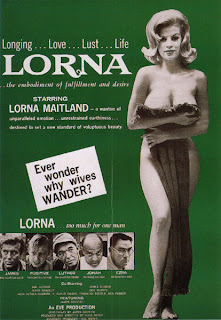 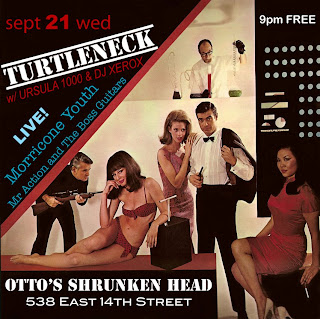 Wednesday, September 21, 2011
Take off your ascot and slip into something a little more comfortable
Turtleneck!
A Retro Futuristic Playground
Join DJs URSULA 1000 and XEROX as we take a trip to back in time to the future!
...Fly with us at supersonic speeds as we take a groovy romp through
space age pop, spy soundtracks, tv themes, exotica plus all the
swingin tunes from Bedrock all the way to Orbit City.
Each Month we will feature a different $5 Specialty Martini to enhance
your listening pleasure. Tonights drink will be the Blondie
In the back room we will have the finest Lounge, soul, exotica,
future jazz combos around
Tonights Bands
9:00-MORRICONE YOUTH!
10:30-Mr Action and the Boss Guitars-Ventures cover band!
9 pm - 4 am
Every 3rd Wednesday
Free At
Ottos Shrunken Head
538 East 14 Street
New York, NY
Ottosshrunkenhead.com
*Black Tie Optional 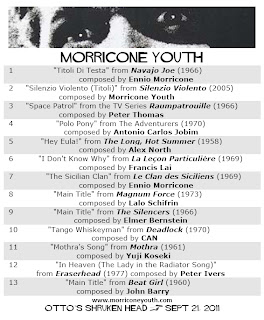 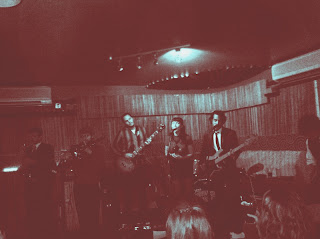 Posted by Morricone Youth at 12:44 AM 0 comments

Watched Picnic at Hanging Rock and Rene reminded me about Gheorghe Zamfir, "The Master of the Pan Flute."

That's some sweet pan flute and serious 70's marketing skills! Zamfir, born in Romania on April 1, 1941, is known for playing an expanded version of the traditional Romanian-style pan flute (nai) of 20 pipes to 22, 25, 28 and 30 pipes to increase its range, and obtaining as many as eight overtones (additionally to the fundamental tone) from each pipe by changing the embouchure.

Hurricane Irene by the Italian Greats