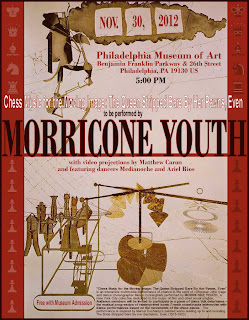 The Copycat Tribute to Serge Gainsbourg 11/28/12 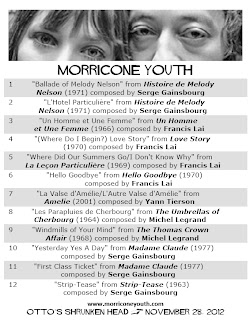 Posted by Morricone Youth at 1:05 AM 0 comments 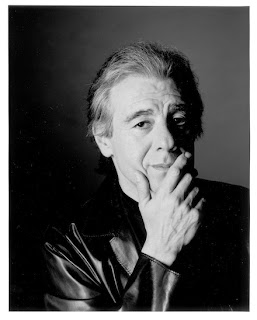 
Listen back to the on-demand archive HERE or via the free EVR Mobile App.

If you are a fan of Morricone Youth, you are a fan of Lalo Schifrin. On this Sunday's special episode, host Devon E. Levins welcomed the acclaimed film and television soundtrack composer, pianist, conductor and arranger for an exclusive interview and in-depth listen to Lalo Schifrin: My Life In Music, the new four-CD boxed set released this week by Aleph Records of music from the legendary composer’s storied career in film, jazz, and classical music.

The boxed-set features music from three-dozen films, jazz and symphonic pieces composed by Schifrin, and unreleased music from films including Charley Varrick, The Beguiled, Joe Kidd and Coogan’s Bluff. Along with over five hours worth of music, a forty-eight page book is included with archival photos and notes.  This release spans music from all aspects of Mr. Schifrin’s career, from the early beginnings of his film music to the big hits that include Mission Impossible, Dirty Harry, Enter The Dragon, Amityville Horror, Bullitt! and Cool Hand Luke.  Also represented is music from his jazz and classical compositions including work commissioned by Dizzy Gillespie, as well as the Grammy-nominated Jazz Meets The Symphony series. The release corresponds with Mr. Schifrin's 80th birthday this year as he continues to work in all three idioms.

Schifrin has written over 100 film and television scores and has been the recipient of five Grammys® (twenty-two nominations), one Cable ACE Award, six Academy Award® nominations and the prestigious Max Steiner Film Music Achievement Award as well as a star on the Hollywood Walk of Fame.  Earlier in his career, Schifrin played piano, composed and/or arranged for Argentine tango bandoneón master Astor Piazzolla, jazz trumpeter Dizzy Gillespie and bandleader Xavier Cugat's Latin dance orchestra. Beginning In the late 1960s and through 1980s, he maintained a long working relationship with Clint Eastwood, particularly the Dirty Harry films. In the classical composition field, Schifrin has composed over 60 works.  His music is a synthesis of traditional and twentieth-century techniques, and his early love for jazz and rhythm are strong attributes of his style with a tendency to juxtapose universal thoughts with a kind of elaborated primitivism.
Posted by Morricone Youth at 1:02 AM 0 comments

Tune into your source for all things soundtrack, Morricone Youth, on East Village Radio this Sunday, November 11, 2012 from 2-4p ET, for Morricone Youth's sixth annual tribute to the namesake of the show, Ennio Morricone. Considered as one of the most influential film composers of all time, composing for over 500 films and selling over 40 million records worldwide, Morricone wrote the film scores to such classics as Sergio Leone's Spaghetti Westerns including "The Good, The Bad & The Ugly" (1966), John Carpenter's remake of "The Thing" (1982), Brian De Palma's "The Untouchables" (1987) and Guiseppe Tornarore's "Cinema Paradiso" (1988).


Il Maestro turned 84 yesterday on Saturday, November 10. Host Devon E. Levins will be dedicating an entire two hours to his music in his honor.
Listen live or to the archive HERE!

Posted by Morricone Youth at 1:04 AM 0 comments