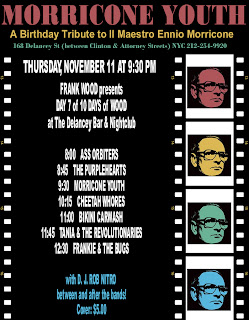 Posted by Morricone Youth at 1:59 AM 0 comments

Listen to a very special Morricone Youth as your host Devon E. Levins welcomes acclaimed artist, actor, and musician John Lurie to the program for the first in a special two-part discussion about Mr.Lurie's soundtrack work. Part two will be streamed live on November 6th at 2pm ET at www.evr.com and on EVR's free mobile app for the iPhone and Android.

Born in Minneapolis, Minnesota in 1952, John Lurie remains a true American original. Throughout the 80s and 90s, Lurie led the legendary band, The Lounge Lizards, which Lester Bangs of The New York Times proclaimed as "staking out new territory that lies somewhere west of Charles Mingus and east of Bernard Hermann."   In addition, he recorded 22 albums and over 20 film scores including The John Lurie National Orchestra's Men With Sticks and movie soundtracks for over 20 films, the most notable being Stranger than Paradise, Down by Law, Mystery Train, Manny and Lo, Clay Pigeons, Animal Factory, and Get Shorty, which earned him a Grammy nomination.

In 1999, Lurie created the fictional character Marvin Pontiac and recorded The Legendary Marvin Pontiac - Greatest Hits CD for his own label, "Strange and Beautiful Music". Marvin Pontiac was said to be an insane African musician, who would only record for a label if its president came out and mowed his lawn. Pontiac was later hit and killed by a bus, outside the Esmeralda State Mental Institution.
As an actor, he had starring roles in the Jim Jarmusch films Stranger than Paradise and Down by Law. This led to appearances in numerous films with some of the world's foremost directors: Wim Wenders’ Paris, Texas; Martin Scorsese’s The Last Temptation of Christ; David Lynch’s Wild at Heart; as well as a regular role on the HBO series Oz. Following his work in film, Lurie went on to write, direct, and star in the critically acclaimed television series Fishing with John, which aired on IFC and Bravo. Episodes included guests such as Tom Waits, Willem Dafoe, Matt Dillon, Jim Jarmusch and Dennis Hopper. According to the critic Glenn O'Brien, "Lurie elevates this venerable institution to a whole new level, doing for the American fishing format what Cézanne did for the still life."
For over thirty years, Lurie has been drawing and painting, yet only in the last eight years has he chosen to exhibit his work.  John Lurie emerged onto the art scene in the spring of 2004, when he had his first painting exhibition at Anton Kern Gallery. Since then Lurie’s work has been exhibited in esteemed galleries throughout the world. His solo museum exhibits include P.S.1. Contemporary Arts Center in New York, Musee Des Beaux-Arts De Montreal, the Musee d'Art Moderne Grand-Duc Jean in Luxembourg and the Watari Museum of Contemporary Art in Tokyo, who gave their entire museum to the presentation of Lurie's work.The Museum of Modern Art in New York have acquired his work for their permanent collections.
Lurie has published two books of his work, Learn To Draw, a compilation of black and white drawings and most recently A Fine Example of Art, a full color book of over 80 reproductions. John Lurie's drawings and paintings express a disarming mixture of corrosive wit, raw emotion and unblemished sensitivity. His works bear the mark of an outsider, a quality present throughout his idiosyncratic career. To quote the artist: "I like to draw and paint. It is a river to me. I am not an Indian." 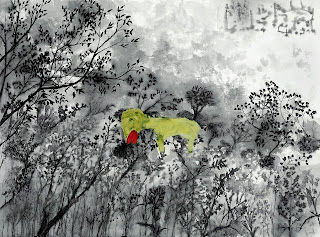 Listen to the archive HERE!

Posted by Morricone Youth at 12:35 AM 0 comments 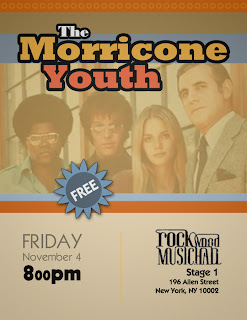 This Friday, November 4th, is the 308th day of the year (309th in leap years) in the Gregorian calendar.  There are 57 days remaining until the end of year, which means we, the Morricone Youth, have less than a handful of performances remaining until apocalyptic 2012.  Friday is one of those performances...  Hope to see you there.


Remember to listen to
Morricone Youth Radio
Sundays from 2-4 PM ET Only on... East Village Radio www.eastvillageradio.com/shows/morriconeyouth www.myspace.com/morriconeyouth
www.morriconeyouth.blogspot.com
Music from the first talking picture onwards. If it was written to accompany images on a screen, we'll play it. Popcorn optional 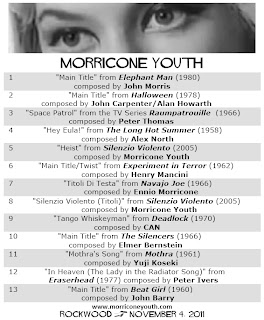 Posted by Morricone Youth at 1:20 AM 0 comments