On Morricone Youth yesterday, Sunday May 20th, host Devon E. Levins welcomed John Woods, Cinema Director of Nitehawk Cinema in Williamsburg to curate the show. Many may recognize John as the co-founder of Williamsburg's Reel Life Video back in 1997...or as the lead singer of New York hardcore band Hell No (1991-1999)...or as the editor of hardcore fanzine Hot Poop (1990-1993)...or as the documentarian of Stay High 149...but he also currently wears the hat of Cinema Director at Nitehawk Cinema as well as that of an ardent soundtrack collector.  We think he knows a thing or two about film and film music. 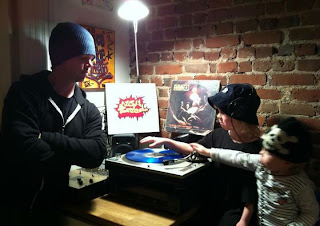 For those not in the know, Nitehawk Cinema is a unique triplex movie theater located at 136 Metropolitan Avenue in Williamsburg, BK featuring first run films with individual table-side food and beverage service inside each of their three theaters in addition to having a separate bar and cafe for those waiting to see a film.  The menu, designed by Saul Bolton, owner of Saul in Boerum Hill and The Vanderbilt in Prospect Heights, Brooklyn, includes a selection of made-over classic film-watching snacks, as well as full entrees, desserts, specialty popcorn, cocktails, beer and wine.  Programming also includes monthly "Live Music & Moving Pictures" and "Midnight Music Movie" series of silent films and midnight movies, respectively, both scored by live musicians and bands, Q&A screenings with directors and actors, Raspberry Brothers comedy/sing-a-longs to classic bad movies, and children-friendly weekend brunch screenings.  Nighthawk was recently announced as one of the curators for the upcoming Northside Film Festival this summer.


John Woods will be spun and discussed his favorite soundtrack vinyl for the entire action-packed two hour installment of Morricone Youth.  Listen HERE!
Posted by Morricone Youth at 2:22 PM 0 comments

On Morricone Youth this Sunday (2pm ET), host Devon E. Levins welcomes Silencio, a Pittsburgh-based sextet inspired by the film and television music of David Lynch and Angelo Badalamenti. The mystery and dark intrigue surrounding the cooperative works of Lynch and Badalamenti has mesmerized and haunted many a subconscious over the years.  There’s something unique about the pairing of Badalamenti’s musical scores to Lynch’s dreamy scenery that is unsettling and simultaneously familiar.  There’s also an era of innocence in the music that creates a timeless appeal without regard to the modern, nightmarish and sometimes corrupt scenarios presented within the films.  It’s these things that keep people perpetually fascinated with the works of these genius artists, and it’s these things that have initiated the project Silencio, a formation of musicians situated around two core members from the Pittsburgh band Mandrake Project…A group that’s no stranger to working within the cinematic genre. 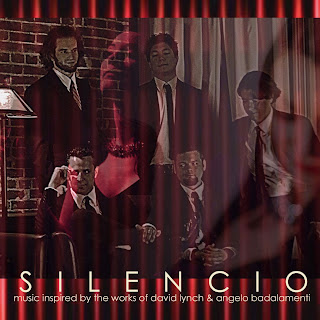 Silencio began as a recording project between David Jamison and Kirk Salopek who had shared a longtime mutual admiration for the work of Lynch’s films and Badalamenti’s eerie, jazzy scores.  They also realized to their surprise that nothing quite like Silencio really existed.  Of course there are the droves of Lynch/Badalamenti devotees, inspirees and bands covering the occasional movie theme, but no one seems to have embraced the WHOLE concept as a direct and focused project.  Both Salopek and Jamison had a number of original ideas inspired directly from the musical selections in "Twin Peaks," "Mulholland Drive" and "Lost Highway" which quickly took shape into material for their debut album scheduled for release on June 30th.  Not long after recording began, the search for additional players ensued and the decision to perform the project as an entire Lynch tribute was solidified.  What was first planned as a rotating line-up of members turned into a dedicated, full-time cast adopting Matt Booth (upright & electric bass), Lee Hintenlang (sax), Dan Barrett (keys) and the uber-sultry Dessa Poljak handling the haunting, smoky duty of vocals.
Silencio performs selections from all of Lynch’s films spanning “Eraserhead” to “Inland Empire”, with a focus on the works from the “Twin Peaks” series and “Fire Walk With Me” film. The group’s original offerings seamlessly intersperse throughout the movie material and fit the occasion as if it were written as outtakes from some of Badalamenti’s “Lynch-iest” sessions.  If there were ever a group to perform for an event and capture the vibe of a “damn fine cup of coffee”, cherry pie and wind through the Douglas Firs, then Silencio is that group. The band will be performing later that evening, Sunday, May 20 at Le Poisson Rouge at 7:30pm ET.
Listen live or to the archive HERE starting at 2pm ET this Sunday!
Posted by Morricone Youth at 10:25 PM 1 comments


SUNRISE is the supreme silent film, the highest peak of a lost art form. F.W. Murnau, the German director of "Nosferatu: A Symphony of Horror," was brought to Hollywood, given an unlimited budget. The result is Murnau's masterwork, "Sunrise: A Song of Two Humans," It's a timeless tale of murder, love, emotion, seduction, and reconciliation. A couple's love is set against the hostile, destructive forces of the Jazz Age City. A mythical story played out in polar oppositions, sunrise/sunset, light/dark, farm/city... Almost without any dialogue (there are just a few intertitles), it is the use of images that brings this film to such significance. It uses all the unique abilities of the silent film to create ideas , sensations, a living dream. 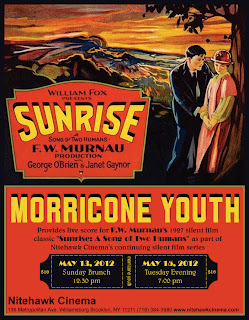 Posted by Morricone Youth at 3:03 AM 0 comments

Be sure to listen to Morricone Youth on Sunday, May 6th starting at 2pm ET, as host Devon E. Levins will welcome acclaimed film and television soundtrack composer Danny Elfman for an exclusive interview and in-depth listen to his music. Danny Elfman's score to Dark Shadows, along with the composer's highly distinguished career, will be the subject of this special show. 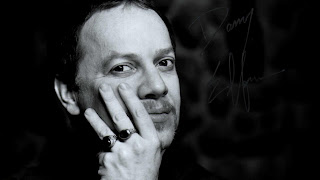 Los Angeles-born and raised Daniel Robert Elfman spent his youth in the flickering light of a movie theater, where his affinity for film music was born. His musical idols of the time were all film composers: Bernard Herrmann, Franz Waxman, Dimitri Tiomkin, Max Steiner. Despite a career that started with a rock band (Oingo Boingo,of course), Elfman would eventually move into scoring films, where he would not only showcase a talent that payed homage to the film score masters, but to the 1930s bouncing jazz sounds of artists like Cab Calloway and classical composers Prokofiev and Stravinsky. 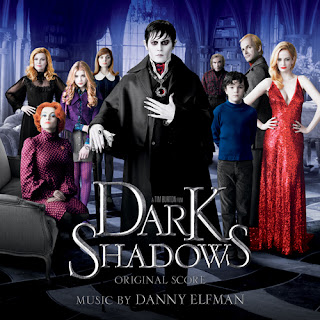 His personal tastes for the off-kilter and bizarre made him a popular choice for the darker edges of cinema, but that reputation as a "dark" composer seemed unearned judging by his credits. His first studio film score was for Tim Burton's Pee-Wee's Big Adventure (1985), where Elfman scored the comic exploits of Pee-Wee Herman with a Nino Rota-like carnival score. Comedy assignments followed -- Back To School and Summer School -- both of which benefited from Elfman's orchestral scores. His efforts at this point belied his lack of formal musical training. In fact, Elfman had not studied composition, orchestration, counterpoint or conducting, instead picking up these skills through trial and error, and by simply composing. His Oingo Boingo bandmate Steve Bartek acted as Elfman's orchestrator.


Despite his outsider status in a part of the film industry dominated by traditions, Elfman continued to set film music trends. His breezy rock n' roll style score for Midnight Run inspired a never-ending wave of imitators, but it wasn't until 1989 when Elfman turned heads with his towering masterwork for Tim Burton's Batman. It was this score that catapulted Elfman into A-list assignments that were often tuned into his sensibilities. It also allowed the composer to work with directors for whom he admired. In the early '90s he collaborated with Clive Barker (Nightbreed) and Sam Raimi (Darkman). His success with Batman made him a natural choice to score Warren Beatty's Dick Tracy. It was at this point that Elfman had earned his reputation as the darker film composer alternative. Richard Donner's Scrooged, Burton's Beetlejuice and Edward Scissorhands, all helped solidify the "Elfman sound." Elfman has since scored a broad range of films for a who's who of directors including Gus Van Zant (Good Will Hunting and Milk, both Oscar-nominated scores), Barry Sonnenfeld (Men In Black, Oscar nominated score), Brian de Palma (Mission: Impossible), Sam Raimi (A Simple Plan, starring Elfman's wife Bridget Fonda, Spider-Man 1 and Spider-Man 2), Guillermo del Toro (Hellboy 2), Peter Jackson (The Frighteners) and, obviously, further collaborations with Burton (Sleepy Hollow, Planet of the Apes, Big Fish, an Oscar nominated score, Charlie & the Chocolate Factory and Alice in Wonderland). 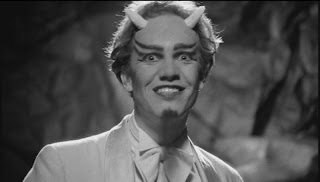 A Danny Elfman bio would be remiss without referencing Oingo Boingo. The band arose out of the Mystic Knights of the Oingo Boingo, an avant-garde comedy/music/theatre troupe founded by Danny Elfman's older brother Richard in 1972. During that period Richard directed the underground cult film Forbbiden Zone (1980), for which Danny provided the music. When the Mystic Knights dissolved in 1978, the younger Elfman consolidated it's musical elements into a more manageable band format. With a scaled-down name, their new line-up as an octet went on to become a cult phenomenon producing eight studio albums while working around the demands of Elfman's budding career as a film composer penning ska-influnced new wave hits such as Dead Man's Party, Private Life and Weird Science. The group's final album was 1994's Boingo, released before they officially bid adieu to their hometown fans with a performance at the Universal Amphitheatre on Halloween 1995.


27 years since Pee-Wee's Big Adventure, Elfman has gone on to score all but two of Burton's major studio releases—Ed Wood and Sweeney Todd—including Burton's latest, Dark Shadows, a film based on the 1966-1971 gothic soap opera, starring Johnny Depp as the 200-year old vampire Barnabas Collins and Michelle Pfeiffer as his reclusive cousin and matriarch of the Collins family. The film is in theaters on May 11, 2012 and the soundtrack is available on WaterTower Records on Tuesday, May 8, 2012.

Listen live here, or via EVR's free mobile app for iPhone and Android, starting at 2pm ET on Sunday, May 6th!