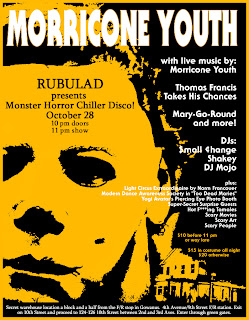 Brand-new never-before-seen secret warehouse location a block and a half from the F/R stop in Gowanus. Huge rooftop views of terrifying industrial Brooklyn.

This is a costume party: wear a costume. You'll have more fun!

Our rules apply except smoking on roof or in courtyard, please.
Happy Halloween from your Rubulad. 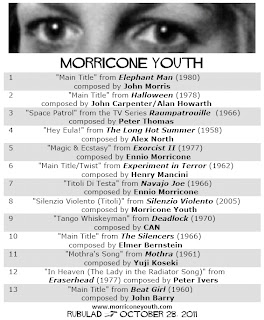 Posted by Morricone Youth at 12:11 AM 0 comments 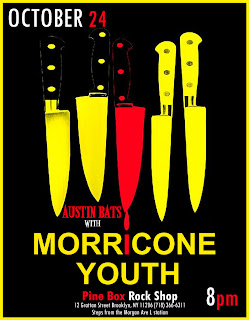 Posted by Morricone Youth at 12:06 AM 0 comments

On Morricone Youth this weekend, just in time for the Halloween season, host Devon E. Levins will welcome onto the program acclaimed film and television soundtrack composer and sound designer Alan Howarth for an exclusive interview and in-depth listen to his music. 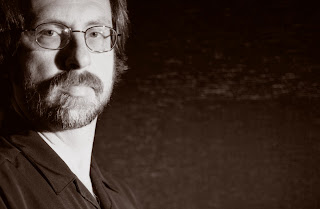 From scores to special sound effects, from Halloween stalkers to STAR TREK, Alan Howarth's electronic imagination has contributed to some of the biggest genre films of t10
he '80s.  Alternately wearing the hats of both composer and sound effects man, Howarth has been a frequent collaborator with John Carpenter on his films beginning with ESCAPE FROM NEW YORK in 1980 and including HALLOWEEN II & III, CHRISTINE, BIG TROUBLE IN LITTLE CHINA, THEY LIVE and PRINCE OF DARKNESS and has scored many on his own, including THE LOST EMPIRE, RETRIBUTION, HALLOWEEN 4 & 5, THE DENTIST, HEADLESS, BOO! And, most recently, EVILUTION and BASEMENT JACK.  He has also provided sound design for films like POLTERGEIST, RAIDERS OF THE LOST ARK, all the STAR TREK movies, THE HUNT FOR RED OCTOBER, Coppola's DRACULA, TOTAL RECALL, and STARGATE, among others.  In 2001, Alan served as Chief Audio Officer at Electronic Arts, the video game giant.  His personal and technical interests have lead to research and development and creation of an immersive audio system that plays back audio as Sound Pixels™.  Surrounded by this 48.6 channel playback technology, he is also working with colleagues Wesley H. Bateman and Dr J.J.Hurtak in musicological research that has lead to RA Music™ consisting of frequencies defined by the Sacred Geometry of Ancient structures. 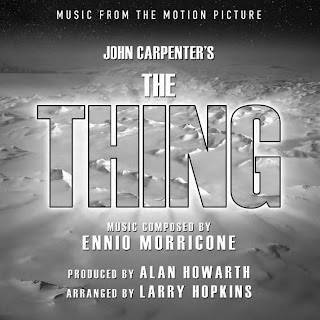 Most recently, BUYSOUNDTRAX Records has released a new recording for the 1982 horror classic, THE THING – MUSIC FROM THE MOTION PICTURE, featuring music composed by Ennio Morricone for the film directed by John Carpenter.  Prior to THE THING, director John Carpenter had gained a reputation as a director who also composed the music for his own films and had begun collaborating with sound designer and fellow composer Alan Howarth on the music for his films. With the enormous success of HALLOWEEN and ESCAPE FROM NEW YORK, he found himself working for Universal on his first big studio film and, with a larger budget at his disposal, Carpenter was able to hire one of his musical idols to score the film. The movie’s soundtrack, though, would be a combination of both Morricone and Carpenter’s sensibilities. Characteristically, Morricone did not compose his score to picture. He composed many pieces of music inspired by the film he’d watched and by the directions he’d received from Carpenter. The music would be edited to fit the film as Carpenter wanted. During the post-production process, Carpenter decided he needed more music for the film and worked with collaborator Alan Howarth to produce some additional electronic music.  The original 1982 soundtrack release for THE THING featured Ennio Morricone’s score for the film, including a wealth of music that ultimately did not get used in the film. For this new release of music from THE THING, the music has been produced and arranged by Alan Howarth and Larry Hopkins, to include newly recorded renderings of the Morricone music (including recreations of the tracks not used in the film) and Howarth has also provided new performances of the music he produced for the film with John Carpenter, making their premiere appearance on this album. The music is presented in a sequence closer to film order. 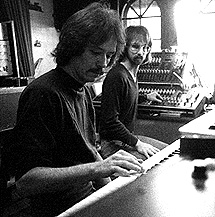 The Thing, along with the composer's illustrious career, will be the subject of this Sunday's edition of Morricone Youth.

The interview is archived HERE!

Wednesday, October 19, 2011
Take off your ascot and slip into something a little more comfortable
Turtleneck!
A Retro Futuristic Playground
Join DJs Ursula 1000 and Xerox as we take a trip to back in time to the future!
...Fly with us at supersonic speeds as we take a groovy romp through
space age pop, spy soundtracks, tv themes, exotica plus all the
swingin tunes from Bedrock all the way to Orbit City.
Each Month we will feature a different $5 Specialty Martini to enhance
your listening pleasure. Tonights drink will be the Moon-tini
And in the back room we will have the finest Lounge, soul, exotica,
future jazz combos around
9:30-Score
10:30 Morricone Youth
9 pm to 4 am
Every 3rd Wednesday
Free At
Ottos Shrunken Head
538 East 14 Street
New York, NY
Ottosshrunkenhead.com
*Black Tie Optional 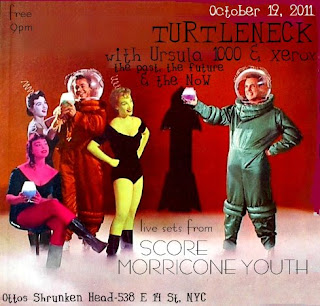 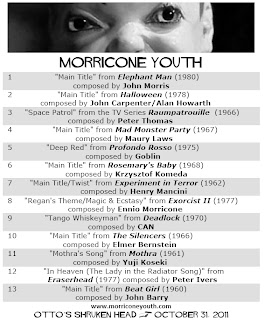 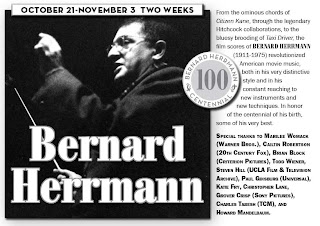 The great master gets two weeks of films with his special brand of musical magic at Film Forum from October 21-November 3. By no means noir-centric, the festival schedule is chock full of memorable films from all genres.

Of course, plenty of other Hitchcock: North by Northwest, The Trouble With Harry, The Birds, Psycho, and The Man Who Knew Too Much.
Posted by Morricone Youth at 3:53 PM 0 comments

Email ThisBlogThis!Share to TwitterShare to FacebookShare to Pinterest
Labels: Morricone Youth Film Forum Bernard Herrmann Hitchcock North by Northwest The Trouble With Harry The Birds Psycho Man Who Knew Too Much 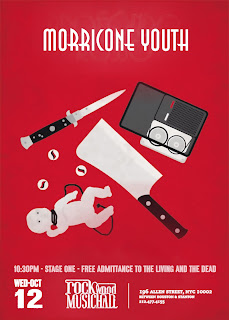 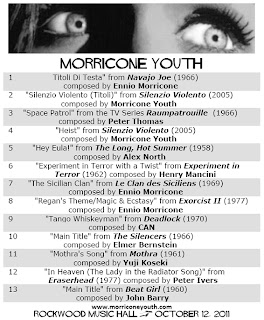