Posted by Morricone Youth at 3:11 AM 0 comments 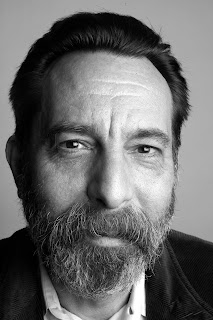 On the September 16, 2012 edition of Morricone Youth, Devon E. Levins welcomed film and television soundtrack composer and founding member of The Lounge Lizards Evan Lurie for an exclusive interview and in-depth listen to his music. In addition to his twenty year tenure in The The Lounge Lizards and releasing three solo albums, Evan Lurie has composed music for over 30 films and television programs including Steve Buscemi's Trees Lounge, Interview and Lonesome Jim, Cindy Sherman's Office Killer, Roberto Benigni's Johnny Stecchino and Il Mostro, Stanley Tucci's Joe Gould's Secret, Philip Seymour Hoffman's directorial debut Jack Goes Boating and four seasons of Nickelodeon's The Backyardigans. Notably each of the 77 episodes of The Backyardigans introduced children to a completely different musical genre.

Evan Lurie previously gained renown as the pianist of The Lounge Lizards formed in the 1970's in the Lower East Side recording nine albums and performing internationally through the late 1990's. Lurie composed some of the band's most memorable songs. His second solo album, Pieces of Bandoneon (1987) was commissioned as the soundtrack to Japanese yakuza film Chochin and his third, Selling Water by the Side of the River (1990), included tracks originally composed for Benigni's Il Piccolo Diavolo soundtrack. His subsequent album on John Zorn's Tzadik label, How I Spent My Vacation (1998), consists of pieces Lurie wrote for many smaller budget films such as Trees Lounge and Danny Leiner's Layin Low, and performances by many of his Lounge Lizard cohort from various incarnations.

The ARCHIVE can be heard HERE and the playlist viewed HERE!


Posted by Morricone Youth at 3:03 AM 0 comments 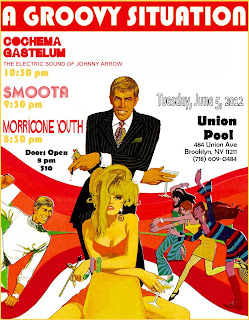 Thanks to Rocket Rob Patton for the flyerage: www.twoblacksocks.com
Posted by Morricone Youth at 2:24 AM 0 comments

Posted by Morricone Youth at 2:24 AM 0 comments 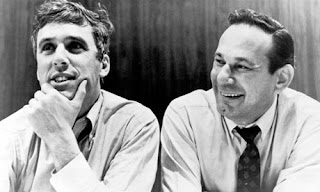 Hal David, the renowned lyricist whose collaborations with composer Burt Bacharach produced endless memorable hits in the '60s and '70s died in Los Angeles on Saturday September 1st. He was 91. The September 9, 2012 radio show is dedicated to his work. His timeless soundtrack work includes Louis Armstrong's "We Have All The Time In The World" from On Her Majesty's Secret Service, Shirley Bassey's "Moonraker," Tom Jones' "What's New Pussycat," B.J. Thomas' "Rain Drops Keep Fallin' On My Head," and Dusty Springfield's "Look of Love" from Casino Royale. You can find a list of his soundtrack hits HERE. You can listen to the archive of the show HERE and/or view the PLAYLIST.
Posted by Morricone Youth at 5:26 PM 0 comments