The Other Brian May

Finally took on Michael Cimino's epic Heaven's Gate, the film which is attributed to single handedly leading to the demise of the director-driven film production Hollywood era of the 70's. I can't say it was as bad as everyone says but it was admittedly self indulgent and unnecessarily 3 hours and 39 minutes. Definitely a great looking film with the love triangle between Kris Kristofferson, Isabella Huppert and Christopher Walken driving the plot. The composer David Mansfield, The Alpha Band violinist/guitarist with T Bone Burnett and Stephen Soles, has a few cameos, one as the town roller skating fiddler, one of the more memorable scenes which can be seen HERE.  Huh?  In the old West? The bottom line is that it is a great looking film:

Who needs to see the doc when you finally got to see Steve Ignorant play the songs?? 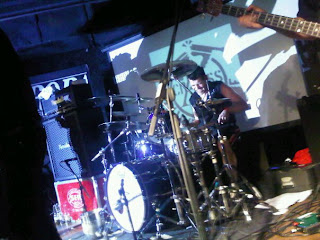 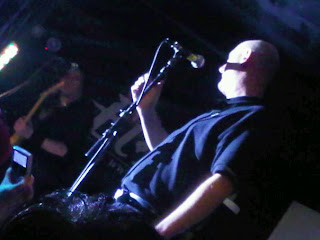 Pretty much makes sense being that I happened to see the Season 4 episode of Buffy the Vampire Killer, I mean, Slayer where her boyfriend Riley turns into an Anarchist (on 4/20) after finding out that Buffy slept with Angel.  Not sure how the master illusionist from Tennessee Harris III fits into all of this...
Posted by Morricone Youth at 3:55 AM 0 comments

I had not seen "Mad Max 2: Road Warrior" since seeing it originally in the theaters in Las Vegas circa 1982. After similarly re-watching Mad Max 1 in San Diego last month, I felt like I needed to finish what I started ("Beyond the Thunderdome" is on deck, of course). Even better than I remembered considering what a turd this guy turned into the past 10 years. M.Youth drummer Sal A. Mander should dress as Bruce Spence for Halloween. Notable is Brian May's Chase Theme (the Australian composer, not to be confused with the Queen guitarist):

After receiving Mr. T connoisseur Dion's blessing, I proceeded to watch Joel Schumacher's second directed film "D.C. Cab" for the first time. First credited film for Bill Maher and Paul Rodriguez although everyone knows the real reason for watching this film is Mr. "I Pity The Fool" T who surprisingly had a relatively minor role compared to Gary Busey and Adam Baldwin of "My Bodyguard" fame. Giorgio Moroder scored this sucka!

I always assumed that 80's Tucson band Naked Prey (post-Green on Red, pre-Calexico/Giant Sand) was named after the 1966 Cornel Wilde film so I finally watched it. Didn't realize it was filmed in South Africa with a primarily South African cast and soundtrack (which features Nguni tribal songs specifically recorded for the film). Relates to Road Warrior because the aforementioned turd supposedly ripped parts of this one off for his "Apocalypto" which I refuse to independently confirm.

Posted by Morricone Youth at 12:57 AM 0 comments

Ben Sander is the creator of Brini Maxwell – the “prototypical, prefeminist 1960’s homemaker”* host of The Brini Maxwell Show for the Style network.  Inspired by a divine thrift shop purchase of 1950's nesting bowls, Ben first began sharing his vintage/classic know-how as Brini with other Manhattanites in 1998 through the cable access television show of the same name.  With an emphasis on uncompromising fabulousness, the show quickly garnered a devoted fan base and Ben established himself as the “go-to-girl” on vintage fashion and mid-century modern treasures. His book Brini Maxwell’s Guide to Gracious Living was released in the fall of ’05. He’s worked with National Public Radio on a series of audio podcasts and has produced a series of video podcast featuring segments from his original cable access show as well as new material, which can be seen at www.BriniMaxwell.com 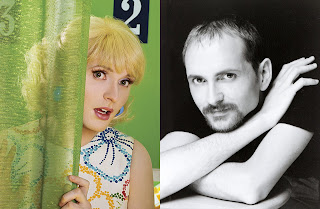 In addition to his television show, Sander has also shared his wealth of knowledge and love of the late 50's, 60's and early 70's in numerous media interviews, which have included Conan O’Brien, CNN, MSNBC, ABC's World News Now, E! Entertainment Television and The Learning Channel.  He also speaks at colleges and universities, conferences and conventions and moderated the Cooper Hewitt National Design Museum’s panel on Authenticity in Design.

Ben Sander/Brini Maxwell will be in the studio with your host Gray Dolores to curate two hours of soundtracks and related discussions on East Village Radio this Sun. April 24, 2011 from 2-4 pm ET!
Tune in live or check the archives here!
Posted by Morricone Youth at 8:12 PM 0 comments 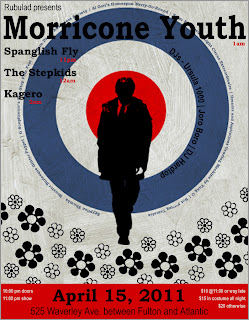 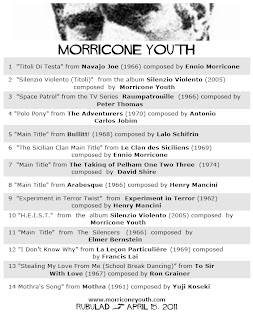 Sidney Lumet, director of over 70 films and television series including the classic "Dog Day Afternoon," "Serpico," "Network" and "The Verdict," died early Saturday afternoon in his home in Manhattan at the age of 86 from non-Hodgkin's lymphoma.  Although Lumet received an Academy Award nomination for his very first feature film "12 Angry Men" and went on to receive 9 more nominations for best director and screenplay, he criminally was never awarded an Oscar for any particular film.  In 2005, he was finally granted an honorary Oscar. 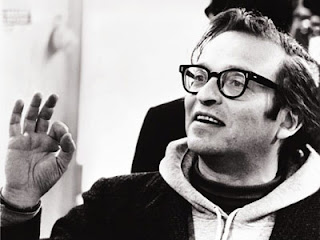 Although known for his gritty New York films, Lumet was born in Philadelphia to a Polish-born actor and began his career as a director with Off-Broadway productions.  After gaining valuable experience in theater, he transitioned into the new medium of television in 1950 working as an assistant to friend and then-director Yul Brynner.  His ability to work quickly while shooting carried over to his film career.  Referred to as an actor's director, he went on to direct the who's who of great actors including Henry Fonda, Marlon Brando, Sophia Loren, Sean Connery, Al Pacino, Omar Sharif, Katherine Hepburn, Richard Burton, Vanessa Redgrave, Joanne Woodward, John Cazale, Dustin Hoffman and Robert Duvall.  Similarly, Lumet worked with the vanguard of old and new composers including Alex North, Quincy Jones, Kenyon Hopkins, Andre Previn, Mikis Theorodakis, John Barry, Michel Legrand, Johnny Mandel, Howard Shore and Carter Burwell.  He directed his last film in 2007, "Before The Devil Knows You're Dead" starring Philip Seymour Hoffman, Ethan Hawke, Albert Finney and Marisa Tomei. 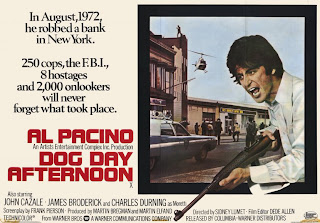 Please join us on Morricone Youth this Sunday, April 10th at 2 pm ET when your host Devon E. Levins will honor Mr. Lumet and his incredible films by dedicating the entire two hours to music from his works. 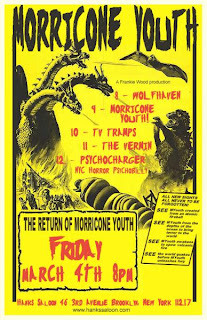 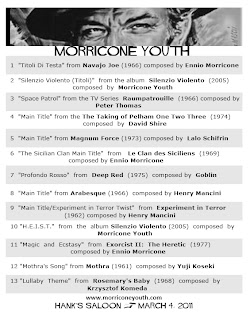 Sex! Trash! Violence! Marc Ribot, noted American guitarist and composer explores the border between classic noir film scores of the 40s thru 60s, and the 80s no-wave bands who worshipped them. Material will include re-arrangements of Henry Mancini (Touch of Evil), Andre Previn (Scene of the Crime), Roy Budd (Get Carter) on the one hand and the Lounge Lizards, Rootless Cosmopolitans, and new noir by the artist on the other.

The New School Arts Festival is a first—a cultural showcase reflecting the artistic and intellectual energy of the entire university. Each festival will explore a single theme by presenting works from genres with an artistic home at The New School, including design, drama, film, literature, music, and critical theory.  Each festival will feature renowned guest artists and theorists, discussion of contemporary criticism, and original work created by New School students and presented at festival events all around campus.

The theme of our first arts festival is Noir, a cinematic style of shadowy expressiveness that had its heyday in the 1930s and 1940s.  Coined by a French critic in 1946, the term film noir refers to movies depicting a morally ambiguous world of cynical private eyes, lonely gangsters, and femme fatales.  Since then, the influence of noir has been felt in areas ranging from fashion design to fine art, graphic art to fiction, suggesting the alienation and disorientation of modernism through stark silhouettes, sexual frankness, stylized emotion, and the absence of sentimentality.  Join The New School community in an exploration of noir in a festival of iconic films, hard-boiled storytelling, graphic art, and illustration inspired by this uniquely 20th century style.

Will be playing all Michel Legrand soundtracks this afternoon on East Village Radio in honor of seeing him perform his last night of a one week's stand at the Blue Note in New York City thanks to Ingrid getting me into the show this evening.  Now if we can only find a way to convince him to come onto the show live!