Who knew CAN's beloved "Vitamin C" from the "Ege Bamyasi" LP arose out the soundtrack for Sam Fuller's 1972 TV crime film "Dead Pigeon on Beethovenstrasse," integrating the same flute, percussion, bells, iconic bassline and guitar until 8 minutes in, when Damo begins shouting the vocal to ‘Vitamin C.’   Just the best! "Vitamin C" is now officially re-labeled in my iTunes as a "Soundtrack."


Check out last week's radio show where and other revealing soundtrack tidbits are unearthed and discussed. Archived HERE. And here is the PLAYLIST.
Posted by Morricone Youth at 5:46 PM 0 comments

Be sure to check out Morricone Youth this Sunday at 2pm ET as host Devon E. Levins has something quite special planned for this week's show.

Many fail to realize that after the official breakup of the "The Only Band That Matters" a.k.a. The Clash in 1986, co-founder, lead vocalist and rhythm guitarist Joe Strummer (born John Graham Mellor on August 21, 1952 in Ankara, Turkey), turned to film and film music.  Starting in 1986, Strummer wrote music for and/or acted in three Alex Cox films; Sid and Nancy, Walker and Straight to Hell (the latter named after The Clash song).  In fact, he scored the entire soundtrack to Walker and later more notably scored the Keanu Reeves vehicle Permanent Record, the Jim Jarmusch-produced When Pigs Fly and the George Armitage-directed Grosse Pointe Blank.  Although he made brief appearances in numerous films such as Aki Kaurismaki's I Hired a Contract Killer and F.J. Ossang's Docteur Chance and the television series South Park, Strummer played his most memorable role Jarmusch's classic, Mystery Train, as a drifter named Johnny (also referred to as "Elvis") in the "Lost in Space" sequence of the film opposite Steve Buscemi.  In 1999, Strummer went on to form The Mescaleros with Pablo Cook and Richard Norris, who originally came together to write the soundtracks for two short films, Tunnel of Love and Question of Honour.  Before Strummer's death on December 22, 2002, The Mescaleros went on to release three albums and contribute notable songs for films Black Hawk Down and Mr. and Mrs. Smith, and provided the theme song to HBO's John From Cincinnati.


The show will be archived HERE!

Posted by Morricone Youth at 2:51 AM 0 comments

Devon Goldberg’s band, Morricone Youth, has been performing in and around New York for over a decade. Dedicated to playing music designed with the moving image, Morricone Youth performed live-scores to several films at Nitehawk, including Jean Rollin’s erotic horror film Fascination, David Lynch’s weird opus Eraserhead and F. W. Murnau’s wildly ambitious Sunrise. This weekend Goldberg and his band of talented cineastes are returning to Nitehawk to perform their score of Rene Laloux’s surreal and lovely Fantastic Planet.
Hatched reached out to Goldberg to talk about his relation to the film, how he and the group prepared and how to re-work the score while paying respect to the original.

Hatched: How did you approach scoring Fantastic Planet? Were you familiar with the film before you worked on the score?
Devon Goldberg: This was a bit different from the others we have done in the past. Many in the band were quite familiar with the film and it’s possibly our keyboardist’s favorite film of all time. I personally saw the film in the early 90′s and became obsessed with Alain Goraguer’s original score and have deejay-ed the track “Deshomination I” for many years.  You hear it’s influence in bands like Air, Radiohead and Stereolab as well as with the endless hip hop producers who have sampled it. I re-watched the film last summer strangely while considering live scoring it for another venue that asked us to do it.

H: Did you take Fantastic Planet’s existing score into consideration while writing your own version?
DG: I concluded that the original music is too iconic and I didn’t want to do the film any injustices so we decided on something else. When Nitehawk curator John Woods asked us this summer to consider doing it for his birthday weekend, we decided we should do it but instead in a way that pays direct homage to the original score. In other words, we are learning the central orchestrated pieces and themes and reinterpreting them the best we can as a six piece band. Besides the improvised portions which we will derive from the original themes, everything we do will be based on Goraguer’s original score. It is a tough score written in deceptively odd meters and unusual instrumentation. To prepare, we have watched the film endlessly, each taking copious notes, and started playing live to the film on mute in our practice room two weeks ago.

H: What scenes in Fantastic Planet were you looking forward to working on the most?
DG: Truthfully, the intro scene when the mother is being chased is my favorite and pretty challenging with a lot of interesting chords and strange hits/stops. The striptease scene theme music is beautiful as is the waltz towards the end (“Les Fusees”)… and, um… as the guitarist, I would be lying if I didn’t admit that I was kind of looking forward to the David Gilmour-esque big rock guitar solo on the End Credits theme….

H: Do you find that writing the score for an animated film somehow different or more challenging than writing for a film that’s live action?

DG: Being that we didn’t per se “write” the score for this one, as we normally do, I’m not sure how to answer this question. If we had, I suspect that it would not be much different as there is quite a bit of action in the film regardless of it being animated as well as there being deep underlying socio-political concepts attributed to the plot, in addition to its surrealist imagery.

H: How much of these scores are worked out ahead of time and how much is improvised during the movie?

DG: We approach every live scoring project differently. It all depends on the film, the film’s original score and our relationship to it. We always try to pay homage to the original score in every case by at least quoting, if not, reinterpreting a memorable portion of it. For Fascination, we quoted “La Vaise Crincante,” the waltz music of the women dancing on the bridge in the title sequence and “L’Interieur Des Ecuries,” the music for the first sex scene. Otherwise, we really wanted to write more driving music in the style of some of our favorite 70′s horror film music.
For Eraserhead we HAD to reinterpret “In Heaven” aka “The Lady in the Radiator Song” by Peter Ivers since we actually perform that song live in clubs. Our singer reverse lip-synched it providing the vocals to the muted film which is actually pretty challenging since Laurel Near does not sing the song in perfect time on screen.
For Sunrise, it was Charles Gounod’s “Funeral March of a Marionette,” which… is more widely known as the theme to the “Alfred Hitchcock Presents” television series, [but]… appeared nearly three decades before in Sunrise.
So, the first thing we do is figure out what from the original score we are going to use and then go from there.  Sunrise was pretty much completely scored from the beginning to the end (which makes it tough), while Fascination was 75% scored/25% improvised and the opposite with Eraserhead (25% scored/75% improvised).
With Sunrise and Fascination, I brought the film itself into my Protools treating them like I would if I were truly being asked by the director to score the film.  So again, it really depends on the film itself and what it involves.
Regardless, any of the improvisation is pretty controlled as far as improvisation is concerned since we really have the film’s sections well mapped out so any improvised part is usually based on a predetermined theme or at least concept or sound but there are always happy accidents, of course, which work their way through it all and make the performances random, exciting and different each night.

http://nitehawkhatched.com/2012/08/07/interview-devon-goldberg-of-morricone-youth-talks-live-scores-and-fantastic-planet/
Posted by Morricone Youth at 2:35 AM 0 comments

A testament to the power of imagination and the limitless possibilities of animation, this masterpiece must been seen to be believed. Even the plot, let alone its visual style is difficult to explain: enormous blue beings known as Triages hold complete dominion over the comparatively infinitesimal human-like Oms. The Traags hold the Oms in relative slavery, with little to no access to basic knowledge but as the captives soon find out, knowledge is power and plan a rebellion against their overseers. As with most Eastern European animation at the time, the story stands as an allegory for the dominion that blanketed free speech courtesy of the Iron Curtain. In fact, the creative process was forced to relocate to France from Prague in order to escape threats by KGB enforcers. Ultimately, the final product is one of the oddest aesthetics ever created, including the most convoluted and intricate sex scenes ever committed to film.


Posted by Morricone Youth at 2:21 AM 0 comments

Check out the 5 Year Anniversary Show Archived HERE on July 29, 2012!!! And here is the PLAYLIST!
Posted by Morricone Youth at 2:17 AM 0 comments

In honor of legendary film and television composer, pianist and conductor Lalo Schifrin's 80th birthday, Morricone Youth paid tribute to one of the show's biggest influences. If you missed it, check out the on-demand archive at the bottom of the page.

Schifrin (nee Boris Claudio Schifrin) was born 80 years ago today in Buenos Aires, Argentina and has written over 100 film and television scores including Mission Impossible, Cool Hand Luke, Bullitt, Amityville Horror, Enter The Dragon, four of the Dirty Harry films, and more recently the Rush Hour trilogy. Lalo Schifrin has won five Grammys along with multiple Oscar noms and has a Star on the Hollywood Walk of Fame. Also just announced last week, Lalo Schifrin will be the recipient of the prestigious Max Steiner Film Music Achievement Award to be presented on October 22 of this year during the Hollywood of Vienna concert.

“I am very fortunate to have been invited by the City of Vienna to receive the Max Steiner Lifetime Achievement Award,” said Schifrin. “This means so very much to me because of the great legacy that this implies, especially because of its music history.”

Posted by Morricone Youth at 2:10 AM 0 comments 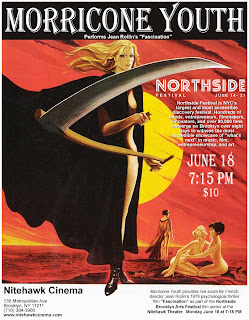 
Posted by Morricone Youth at 1:57 AM 0 comments