Listen to Morricone Youth's The Sound of Film Noir [ARCHIVE] 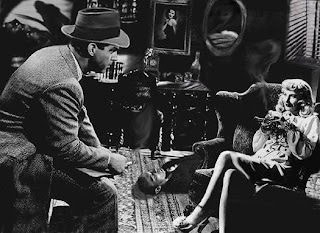 A private eye. A plainclothes cop. A law-abiding citizen turned to a life of crime. A victim of circumstance. Film noir, an often debated term to describe the stylish Hollywood crime melodramas initially regarded from the early 1940s to late 1950s, is a low key black and white visual style with roots in German Expressionistic cinematography with many of the prototypical stories derived from the hardboiled school of fiction which emerged in the U.S. during the Depression. Film Noir music, on the other hand, is obvious when you hear it. A haunting sax solo. A distant trumpet. A cocktail piano over a Latin beat. Sultry songs in a small, smoky nightclub oozing out into the dark, wet alleyway like neon from a flickering sign.
Tune into your source for all things soundtrack HERE, Morricone Youth, this Sunday, January 29 from 2-4pm ET, for host Devon E. Levins' curated listen to sound of the Film Noir. Expect the original masters Miklós Rózsa, Franz Waxman, Adolph Deutsch and David Raksin as well as plenty of re-interpretations and contemporary takes on the music from this classic genre.


http://www.morriconeyouth.com/
Posted by Morricone Youth at 12:02 AM 0 comments 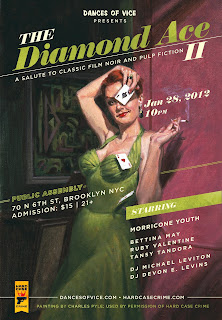 New York femme fatales Bettina May, Ruby Valentine and Tansy Tandora weave tales of violence and temptation before your eyes, and DJs Michael Leviton and Devon E. Levins provide a killer soundtrack for your dancing pleasure until the early hours.

Hard Case Crime prizes will be awarded to the most thematic dressed attendees. 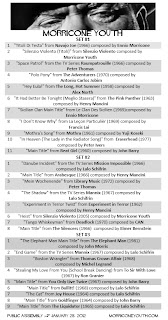 Posted by Morricone Youth at 3:28 AM 0 comments 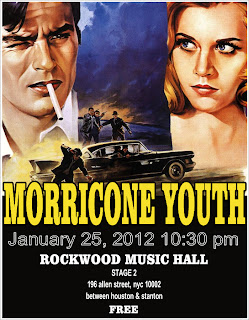 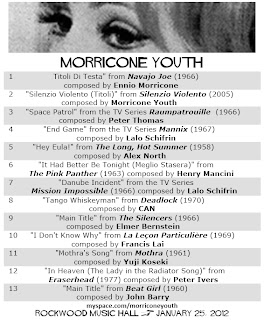 Posted by Morricone Youth at 3:42 AM 0 comments

Please check the 1/22/12 archive HERE for the 2012 -The End Titles installment of Morricone Youth.  All End Titles in honor of this year's impending doom.