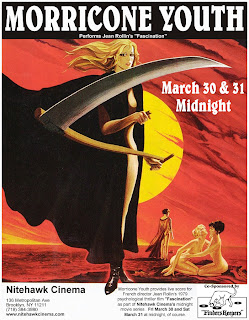 The sexual-psychological thriller masterpiece of renowned French filmmaker Jean Rollin, FASCINATION follows a swaggering thief who hides out in a lavish chateau, holding the occupants at gunpoint. When night falls, he realizes that these two maids are not only deadlier than he imagined, but are gatekeepers to a ring of women with a thirst for blood. The supernatural of the traditional vampire tale is here replaced by the perversity of the blood fetish. This is exploitation cinema of a wholly different kind.

Morricone Youth will provide the music and soundscape for Fascination for 2 nights Friday 3/30 and Saturday 3/31 at Midnight.  Advance tickets available here:
http://www.nitehawkcinema.com/movie.php?movie=143#

Co-Presented by Finders Keepers Records/B-Music who recently released the Original Soundtrack composed by Philippe D'Aram on March 12th.  Finders Keepers will be hosting a raffle of their new Jean Rollin comp: The B-Music of Jean Rollin both nights after the film!

Posted by Morricone Youth at 3:53 AM 0 comments 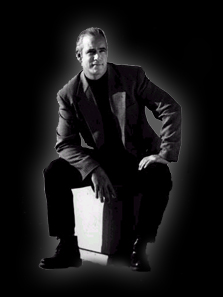 On Morricone Youth this weekend, host Devon E. Levins will welcome acclaimed film and television soundtrack composer Larry Groupé for an exclusive interview and in-depth listen to his music. Larry Groupé might be most known for his collaborations with writer-director Rod Lurie, notably his latest 2011 score for the remake of the 1971 cult classic Straw Dogs (starring James Marsden, Kate Bosworth and Alexander Skarsgård), sports docu-drama Resurrecting the Champ (Samuel L. Jackson and Josh Hartnett), doomsday thriller Deterrence (Kevin Pollack and Timothy Hutton), political dramas Nothing but the Truth (Kate Beckinsale, Matt Dillon and Alan Alda) and The Contender (Joan Allen, Gary Oldman and Jeff Bridges), the latter of which received multiple Academy Award nominations, and ABC TV's drama series Commander in Chief and Line of Fire, nominated for Emmy and Grammy awards as composer of best original score.

A graduate of the Conservatory of Music at the University of the Pacific, Larry earned his Masters of Music in Composition at theUniversity of California San Diego where he studied with Toru Takemitsu, John Cage, Roger Reynolds and Pauline Oliveros. His composing, orchestrating and conducting skills subsequently lead him to the world of film scoring where he won the New York Film Awardfor "Best Score” for The Encounter and two Emmy awards for best documentary score for Jonas Salk: Personally Speaking and Residue. Other notable projects include Ed Wood's last script I Woke Up Early the Day I Died produced as a silent film by and starring Billy Zane, Mike Binder's HBO comedy series The Mind of the Married Man and comedy Man About Town (Ben Affleck), and docudrama Missionsperformed by the London Philharmonic Orchestra at Abbey Road Studios.

Larry has composed, conducted and produced over eighty CD recordings and enjoyed special recognition when he teamed up with the Classic Rock legends YES co-composing ten original songs on the 2001 "Magnification" album, as well as writing overtures, arrangements and conducting the orchestra on the YESsymphonic Tour of the World. He will be revisiting this collaboration this summer when he and original YES vocalist Jon Anderson perform selected works from this album along with others at the EarthDay Festival in Matto Grosso, Brazil on September 8, 9 and 10, 2012. Larry's latest film projects in 2012 include Rocky Capella's Sleeping with the Lion and Jordan Alan's Cats Dancing on Jupiter and Deconstruction Red. 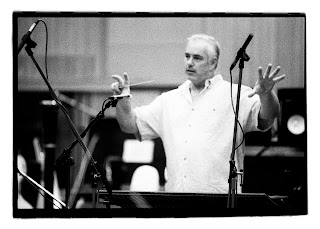 Larry Groupé's distinguished career will be the subject of this Sunday's edition of Morricone Youth. Listen live starting at 2pm ET this Sunday.

Be sure to listen to Morricone Youth on Sunday at 2pm ET as your host Devon E. Levins once again welcomes downtown NYC legend and accomplished painter John Lurie to the studio for a special show.

Last time Mr. Lurie graced the EVR studios with his magnanimous presence was this past autumn for a two-part special in which the musician-turned-painter talked about his soundtrack work (check that out here and here). This time, the show will focus on the genre-blurring work of Lurie’s band, The Lounge Lizards. Expect to hear classic cuts and Lurie’s insights into the formation and legacy of one of the most interesting musical acts to emerge at a time when New York City was bursting at the seams with them.

Listen live on Sunday, March 18th at 2pm ET right here or via our free mobile app for iPhone and Android.


Posted by Morricone Youth at 9:20 AM 0 comments 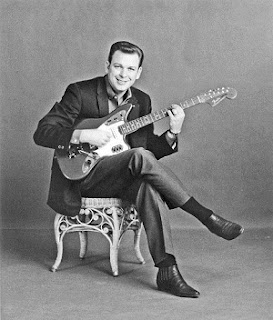 Prolific composer, session guitarist, arranger, vocalist and actor Billy Strange (born William Everett Strange in Long Beach, CA) died on Wednesday, February 22, 2012 in Franklin, Tennessee. He was 81. Strange recorded with Elvis Presley (including many of his late 1960's film soundtracks), the Beach Boys, Phil Spector, Frank and Nancy Sinatra, Wanda Jackson, Dean Martin, Willie Nelson and the Partridge Family; wrote No. 1 single "Limbo Rock" for Chubby Checker and 1962 instrumental hit "Tequila" recorded by the Champs; arranged and played on Nat King Cole’s hit “Ramblin’ Rose;” and arranged for all Nancy Sinatra’s albums in the 1960's including the No. 1 hits "These Boots Were Made For Walkin'," "Somethin' Stupid" (her duet with her father), and "Some Velvet Morning" (her duet with Lee Hazlewood).

A long term member of the celebrated cadre of young Hollywood studio musicians known as The Wrecking Crew (because they took work away from the veteran session musicians of the time), Strange played on psychedelic touchstones like the Beach Boys’ “Pet Sounds” and Love’s “Forever Changes.” Rock and roll, all the surf records, big orchestras, country albums, the crooners, he played it all. He made numerous recordings under his own name, including instrumental guitar albums with versions of James Bond and other spy themes and Morricone Westerns and eventually scored his own soundtracks for psychedelic "De Sade" and "Bunny O'Hare" films.

An occasional actor, Mr. Strange played the steel guitarist Speedy West in “Coal Miner’s Daughter,” the 1980 film about Loretta Lynn, appeared in the TV series “Rawhide,” and ghost sang the vocals for Steve McQueen in "Baby, The Rain Must Fall" in 1965. After more than two decades in Hollywood, Strange relocated to Nashville in the early 1970s to manage a music publishing firm of Frank and Nancy Sinatra. He was inducted into the Nashville Musicians Hall of Fame.

Tune into your source for all things soundtrack, Morricone Youth, this Sunday, March 11th from 2-4 p.m. ET, for host Devon E. Levins dedicates the entire two hours to the genius of Billy Strange.

Posted by Morricone Youth at 5:30 AM 0 comments