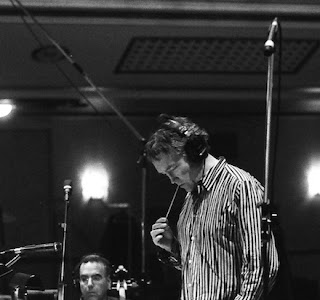 Host Devon E. Levins is excited to welcome one of his favorite film soundtrack composers working today, the acclaimed Carter Burwell live in the studio for an exclusive interview and in-depth listen to his music on Morricone Youth this Sunday at 2pm ET HERE.

With over 80 feature film and television credits, composer Carter Burwell is best known for his longstanding relationship with the Coen Brothers, scoring every film to date (with the exception of O Brother, Where Art Thou?, of course).  His identifiably haunting and brooding style has graced films in nearly every genre, using the occasional big-studio project to finance his work on groundbreaking independent films.  New York City born and bred, Burwell never really considered music as a career while studying animation at Harvard with Mary Beams and George Griffin, electronic music with Ivan Tcherepnin, and independent study at the MIT Media Lab (then known as the Architecture Machine Group).  Upon graduation in 1977, he became a teaching assistant in the Harvard Electronic Music Studio, animated the film Help, I'm Being Crushed to Death by a Black Rectangle, which won first place at the Jacksonville Film Festival and second at the Ottawa International Animation Festival, and worked as Chief Computer Scientist at Cold Spring Harbor Laboratory in Long Island, where he wrote software for image processing, lab automation and protein analysis.  Simultaneously, he moonlighted in punk and no wave bands for fun including The Same, Radiante and Thick Pigeon with Stanton Miranda (Factory Records) while writing music for dance (RAB, which premiered at the Avignon Festival in 1984) and theater (The Myth Project at Naked Angels in 1989).


A mutual friend referred Burwell to Joel and Ethan Coen for their debut feature, Blood Simple (1984), leading to the kidnapping caper Raising Arizona (1987), his first fully orchestrated work for gangster film Miller's Crossing (1990), groundbreaking Barton Fink (1991), seven-time academy award nominated Fargo (1996) and through to the ten-time academy award nominated western remake of True Grit (2010).  Burwell's workload increased steadily in the '90s as he took on more mainstream projects: Doc Hollywood (1991), Wayne's World 2 (1993), and Airheads (1994), and winning wide acclaim for Rob Roy (1995), kicking off his most prolific period of over 35 films in the next five years including Conspiracy Theory (1997), The Jackal (1997), Gods and Monsters (1998), glam rock chronicle Velvet Goldmine (1998), Spike Jonze's debut Being John Malkovich (1999), and Gulf War epic Three Kings (1999).  Burwell remained in-demand through the 2000's, reteaming with Spike Jonze for Adaptation and Where The Wild Things Are, Julian Schnabel's Before Night Falls (2000) and several installments of the Twilight Saga movie series, while teaching and continuing to compose for dance (The Return of Lot's Wife) and theatre (Cara Lucia, Theater of the New Ear).
Carter Burwell's most recent score was for Seven Psychopaths, a British comedy written, co-produced and directed by Martin McDonagh starring Colin Farrell, Sam Rockwell, Woody Harrelson, Tom Waits and Christopher Walken released in the United States on October 12, 2012.  The film marks the second collaboration between McDonagh and Burwell, following In Bruges (2008).  It's a tale about a struggling writer who dreams of finishing his screenplay, "Seven Psychopaths," only requiring a little focus and inspiration.  His best friend, an unemployed actor and part-time dog thief, wants to help by any means necessary along with a partner in crime, a religious man with a violent past.  For some reason the writer has failed to notice that he is a character in a film of the same name, and that nearly every other character in the film and his life is a psychopath.  Lakeshore Records released the soundtrack digitally on October 23, 2012 via iTunes, with a physical release November 20, 2012. For more information on Carter Burwell, visit his website.

Posted by Morricone Youth at 1:47 AM 0 comments 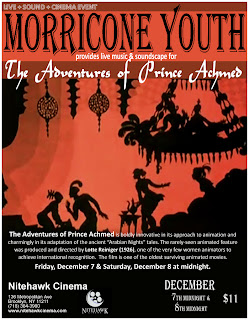